A migraine is referred to as a primary headache disorder, meaning it is not caused by any other illness or condition. It is known for recurring head pain that can be moderate to severe and is described as pounding or throbbing. Most of the time, the head pain is one-sided, but this is not always the case. In fact, head pain does not always have to be present to be a migraine, as it is just one symptom of the condition. Other symptoms are nausea that is often accompanied by vomiting, sensitivity to light, sound, and particular odors, dizziness or vertigo (a sensation of spinning), and visual disturbances.

The term aura refers to recurrent attacks of neurological symptoms including sensory, visual, motor, speech, or other central nervous symptoms. These neurological symptoms only last for a few minutes and go away when a headache begins. Many times they are unilateral, only on one side. In some cases, it is possible to have an aura and then never develop head pain. This can sometimes be called a silent or an acephalgic migraine and becomes more common as people age.

The exact reason a migraine occurs remains a mystery. The underlying cause is believed to be a combination of genetic and environmental factors. Two-thirds of migraine cases run in families. A number of psychological conditions are associated with this condition, such as depression, anxiety, and bipolar disorder.

To learn more about the connection between head and neck injuries and migraines, request our complimentary e-book by clicking the image below. 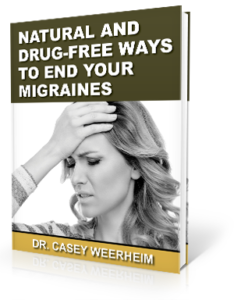 It is most likely that migraines start with a neurovascular disorder that begins in the brain and spreads to the blood vessels. The central nervous system is definitely a contributing factor, along with brainstem malfunction. Can anything be done to alleviate migraine pain?

In 2012, the Journal of Chiropractic Medicine relayed the findings of a study that involved a woman suffering from migraines and tremors. They were observing how the Blair technique, a specific type of upper cervical adjustment given by upper cervical chiropractors, would impact her health.

The woman was 39 years old and was having a migraine as many as 2 or 3 times a week. She had a history of having migraines since she was 10 years old. Her family doctor prescribed various medications —  acetaminophen, sumatriptan, Isometheptene, dichloralphenazone, propranolol, and numerous other over-the-counter pain medications — to no avail. While they gave her some relief, it was only temporary at best.

She agreed to give upper cervical chiropractic care a try. She received specific adjustments to her upper cervical spine, specifically the C1 (atlas) and C2 (axis) bones of the upper neck. After her very first adjustment, she noticed that her migraines and tremors were both improved! She continued seeing good results over the next four months.

The headache disability scale was used in her evaluation. This is a scale using 1 – 100 points (52 for emotional and 48 for functional disability) to indicate how much damage the headache being endured is causing in one’s life. The higher the score, the greater the disability. These were her results before having her adjustment by the chiropractor:

After four months of care, she was re-evaluated and these were her new scores:

This is truly good news if you suffer from migraines!

Here at Upper Cervical of Sioux Falls in Sioux Falls, South Dakota, we use the same method mentioned in the above study to assist our migraine patients. We use specific measurements and scientific methods to determine the exact location of the problem in the upper bones of the neck. We then gently encourage the bones of the neck to move back into place. People are surprised to learn that we are not required to pop or crack the spine as traditional chiropractors do. Our method is more natural and, as you can see from the above results, it is effective and long-lasting. If finding relief for your migraine is on your mind, give us a call today.

To schedule a complimentary consultation with Dr. Casey Weerheim call our Sioux Falls office at 605-250-2024 You can also click the button below.