What Is Upper Cervical Chiropractic?

It is is a rapidly growing form of healthcare that focuses on the intimate relationship between the first two bones in the neck (upper cervical spine), and a vital portion of the nervous system (the brain stem).

This relationship is essential to the body’s ability to preserve and restore health and general well-being. Many comparisons have been made of the brain stem as the control center that extends down an opening in the base of your skull. This area is vulnerable to injuries or irritation around the upper neck. The brain stem works like a telephone cable with thousands of individual wires (nerve fibers) sending signals back and forth between the brain and spinal cord to every system, organ, and cell in the body. Every nerve impulse between the brain and the body must pass through the brain stem. 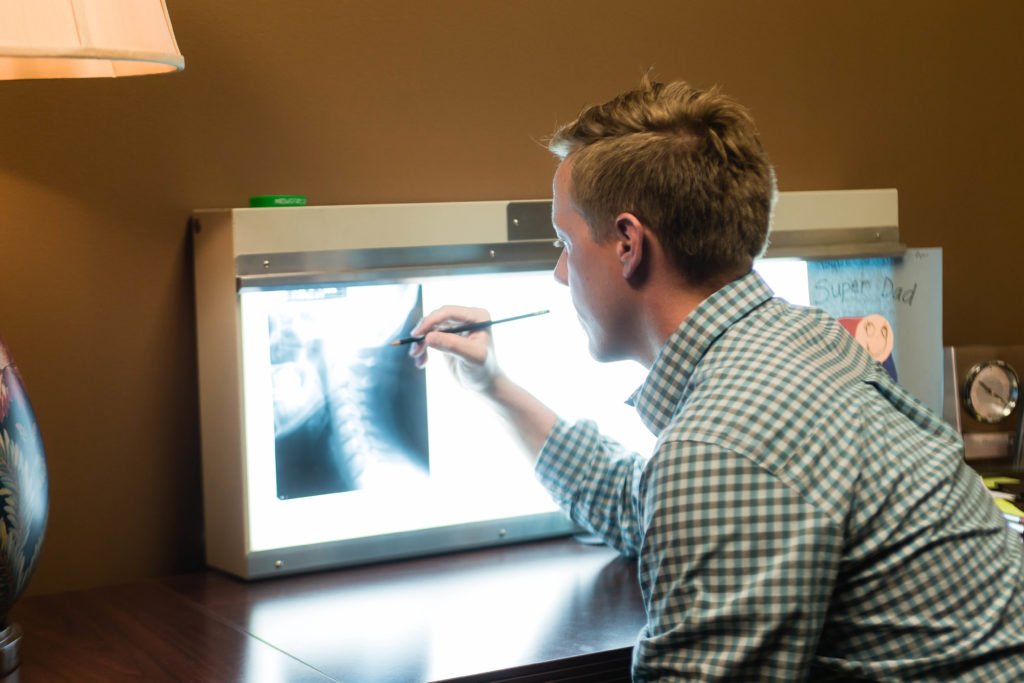 The nervous system is responsible for all communication within the body. It controls the immune system, emotions, vision, hearing, balance, breathing, heart rate, blood pressure, digestion, muscle tension, posture, hormones,and every other function. Irritation or pressure within the central nervous system can interrupt communication between the body and brain, creating a variety of health issues that can be helped with a chiropractor. 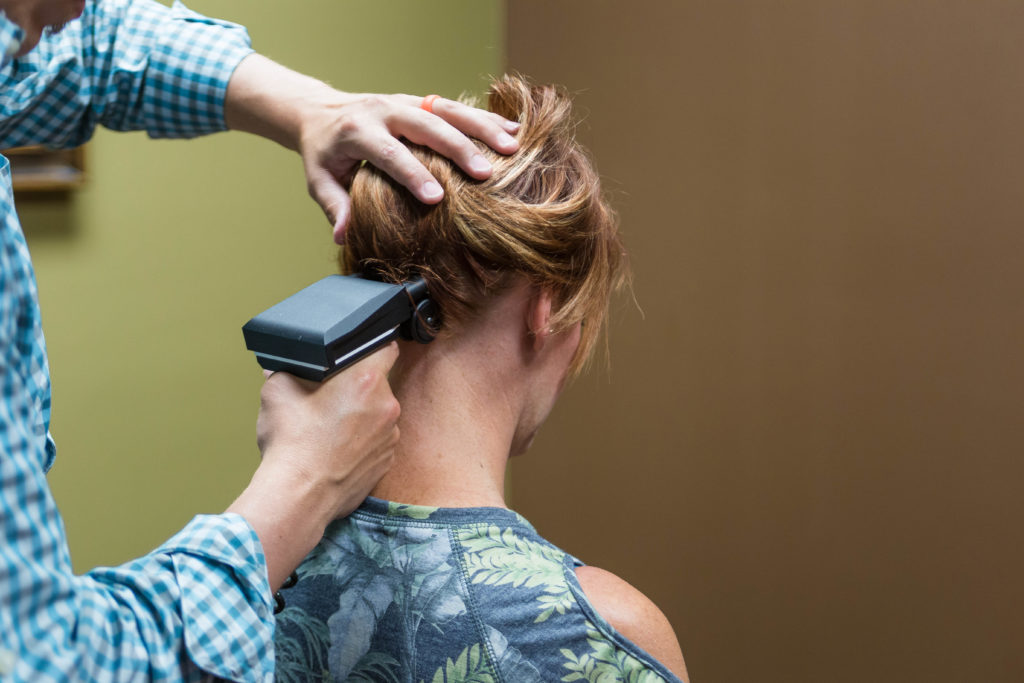 The top two vertebrae, the Atlas and Axis are especially vulnerable to injury or misalignment because they are the most mobile segments of the spine. If neglected, an Upper Cervical misalignment can lead to irreversible spinal degeneration and chronic ill health.

Upper Cervical of Sioux Falls bases our care on the universal law of cause and effect. For every effect or symptom (physical or mental), there must be a cause.Upper Cervical doctors focus their efforts on locating and correcting interference to the nervous system that may be the cause of your health condition. Correcting this interference can allow the body to heal itself naturally without the use of potentially harmful drugs or surgery.

An Upper Cervical Correction is gentle and there is no forceful jerking, twisting, or pulling on the neck. The correction is applied using an exact and controlled technique that allows the head, neck, and spine to return to their proper positions. This restores balance to the body and removes the interference.

If you want things to be different, you must change the things you are doing. Fitness, health, finances, relationships, etc…none of these things will ever change without direct action on the part of the individual. If your health or the health of a loved one is suffering, then you must change your actions. You must seek out a new process or a new procedure; something must change if you are to see a change in your current health status.

The Blair chiropractic technique is unlike any other healthcare procedure in the Sioux Falls area. Backed with the most precise x-ray analysis and thermographic imaging available, Blair doctors are able to locate and safely correct subluxations in the cervical spine (upper neck) that often cause a myriad of health problems.

By focusing on the upper portion of the neck, Upper Cervical of Sioux Falls is able to remove and monitor neurological/vascular/biomechanical imbalances that are often the root cause of many chronic and acute illnesses.

If you or someone you know is looking for hope, restoration, and quality of life, call in today to schedule a consultation. Dr. Casey specializes in restoring and maintaining a higher quality of life and health in his patients, rather than the micromanagement of symptoms and disorders. Contact Us for more information.

The Blair chiropractic technique used at Upper Cervical of Sioux Falls is a particular method for analyzing and adjusting the upper cervical vertebrae of the spinal column. When these vertebrae misalign it can disrupt the brain stem and spinal cord as they exit through the floor of the skull and into the neural canal. Particular attention is delivered to the first two cervical vertebrae, the atlas and axis. These are the 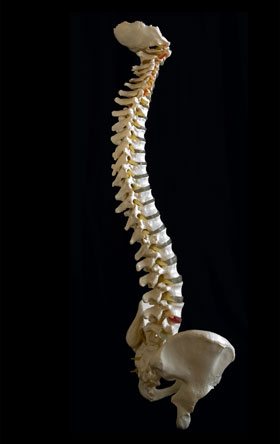 most freely moveable vertebrae in the spinal column as well as the ones most typically misaligned.

After many years of researching the techniques that were available at the time, Dr. B.J. Palmer (the developer of chiropractic) realized that the only place a person could truly have interference to
the nervous system was at the level of the base of the skull – the atlas and axis vertebrae. There are no intervertebral discs between the skull and the atlas, or between the atlas and axis vertebrae. Most
motions of the head and neck occur at this joint. The joint surfaces at this location move more on a
horizontal plane instead of the vertical plane found in the rest of the spine. This area is not supplied with the wealth of supporting ligaments that are found throughout the rest of the spine. Due to these characteristics of the cervical spine, it becomes the weakest link in the chain when exposed to the forces of trauma such as the falls, stress, birth process, car accidents, etc.

Dr. Palmer carried out studies in Germany finding that the brain stem (medulla), extended into the neural canal down to the level of the lamina of the second cervical vertebrae. Then it becomes the spinal cord extending downward. The brain stem has actually been called “Houston Control” since it is the area where nerve cell centers are located. These control many of the major functions of the body like respiration, digestion, heart beat, elimination, our heating and cooling mechanism, constriction and dilation of the veins and arteries, muscle coordination, etc. Most body functions which aren’t consciously controlled are controlled at the brain stem level.

The brain stem at the level of the atlas vertebrae includes approximately ten billion nerve fibers, all sending messages through the spinal cord to the cells of the body and from the cells back to the brain. These nerve fibers are organized in small bunches called nerve tracts. These nerve tracts are either motor or sensory. The sensory nerves allow us function of the organs and systems while moving the body about it’s environment, via the musculoskeletal system. Gray’s Anatomy states, “the nervous system is the master system of the body controlling and coordinating all the functions of the body and relating the individual to his environment.”

The atlas and axis are the only vertebrae in proximity to the brain stem. When they misalign and put pressure on the spinal cord and/or brain stem, they hinder the vital messages being sent to and from the brain to all segments of the body. For example, if the atlas is impinged against the part of the cord that sends messages to the left hand, that individual may experience burning, tingling, or numbness in that hand. If the nerve tracts at thebrain stem level going to the heart are being impinged, that patient may experience palpitations, high blood pressure, or an irregular heartbeat. Since almost all nerves pass through this area, almost any part of the body can be effected when there is pressure on the brain stem or spinal cord.

When a vertebrae misaligns to the extent that it interferes with nerve tissue and reduces the mental impulses it is termed a subluxation. A subluxation may be present for months or years before producing any outward signs such as pain or symptoms, causing the body to break down to a state of diseases

The purpose of the Blair Chiropractic technique is not to diagnose or treat diseases or conditions, but to analyze and correct vertebral subluxations in an accurate, precise and specific manner to allow the body to mend, repair and maintain health from within.

Upper Cervical of Sioux Falls, SD utilizes neurological tests, heat sensitive instrumentation, and other means for detecting if the vertebral subluxation is present or absent. An adjustment is administered only when nerve pressure is found. The Blair Chiropractic technique uses precise x-rays of the upper cervical area to determine which way the vertebrae has misaligned. This information is used to create a precise and specific adjustment tailored and administered to that patient.

Read more about the Blair Technique

Check out our Upper Cervical of Sioux Falls Reviews