Previous Next
Meniere’s Disease: It’s Menacing Effects and Where to Find Relief

Meniere’s disease (MD) is a problem of the inner ear that is known for:

Drop attacks can also occur. This basically means you suddenly fall to the ground but do not lose consciousness. MD usually begins affecting only one ear. However, over time the other ear may be included. Attacks of Meniere’s disease may last anywhere from 20 minutes to 3 hours. The length between episodes varies, and tinnitus and hearing loss may become permanent if not cared for. Meniere’s most often affects people age of 40 to 60 years, although it can occur at any time. Females tend to get it more often than males. It affects 1 in every 1,000 people.

How Did Meniere’s Get Its Name?

In the early 1800s, Dr. Prosper Meniere realized that the symptoms associated with this condition were coming from the inner ear, not the brain as was widely accepted at that time. He also recognized that this was a single disorder that contained a number of symptoms. Over time, his theory became more and more accepted, and the name Meniere’s disease was coined.

Meniere’s disease is still a bit of a mystery among those in the medical community. While it is unclear exactly why it happens, it is often attributed to both environmental factors and genetics. Many theories abound as to why it occurs, including:

Approximately 10% of cases are seen to run in families. Symptoms are related to an abnormal build-up of fluid in the labyrinth and inner ear. Diagnosis is usually made after a discussion of symptoms and a hearing test. Other conditions that have very similar symptoms are vestibular migraines and transient ischemic attack.

The most common way to care for MD is to focus on alleviating the symptoms. Medications are often prescribed to alleviate nausea and anxiety. There really are no measures approved of to prevent attacks from happening. Some suggestions are:

To learn more about the connection between head and neck injuries and vertigo request our complimentary e-book by clicking the image below. 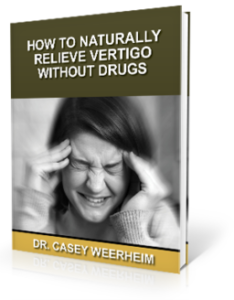 Sometimes injections in the ear are suggested or even surgery if nothing else seems to help, but these are usually last measures because of the associated risks involved. What are some of these risky relief options?

Can Anything Natural Be Used to Control Meniere’s Disease?

There are a few suggestions you can try at home to help reduce the symptoms of Meniere’s disease.

If a misalignment exists in the top bones of the neck – the C1 and C2 vertebrae – this may be an underlying cause of Meniere’s disease. A misalignment here puts the brainstem under pressure and causes it to send improper signals to the brain. It also affects the nerve that connects the ear to the brain. This can be a reason for fluid build-up and then the onset of Meniere’s.

A study observed 139 Meniere’s patients before and after they received care from an upper cervical chiropractor. All of them had previously had some sort of trauma to their head or neck, such as whiplash or a trip and fall. Every one of these patients saw a great improvement in their symptoms after having their neck bones realigned.

Here at Upper Cervical of Sioux Falls in Sioux Falls, South Dakota, we use a very gentle method that does not require us to pop or crack the spine to encourage the bones to realign naturally. Our patients report similar results as those in the above study.

To schedule a complimentary consultation with Dr. Casey Weerheim call our Sioux Falls office at 605-250-2024 You can also click the button below.